Over the last few years, I’ve been learning more and more about anti-racist teaching. I’m realizing that the multicultural approach to education or the color-blind thinking that I knew as a kid obviously isn’t working. Linguistic superiority is an aspect of white supremacy that is present in a lot of schools. We can fight that.

**Trigger Warning: This post contains some information about the mass murder in Atlanta on March 14th, 2021**

“Are we allowed to speak our language at school?”

A few years ago, I was teaching kids how to translate patterns. One boy was really struggling with it. I asked if he spoke another language, thinking we could use translating words as a jumping-off point. He said he spoke Mandarin but admitted that he didn’t “feel right” or “comfortable” speaking it at school. He turned to a friend and asked – “are we allowed to speak our language at school?” His friend shrugged.

Their responses surprised me, but they shouldn’t have. How often had I heard my own teachers snapping at my Korean or Chinese classmates, telling them to “speak English”?  How often, after speaking in Japanese, had my grandmother admonished herself to “speak English!”? Deep inside I knew my students had likely heard similar messages, but the reminder made me indignant. What harm does it do to let students speak in their own languages at school? They’re writing, reading, and engaging in class discussions in English; they’re going to learn the language. And what about the harm that comes from teaching students that their languages don’t belong in places of learning? We can’t claim to be creating inclusive school environments when we deny students the basic right to speak in their own languages. 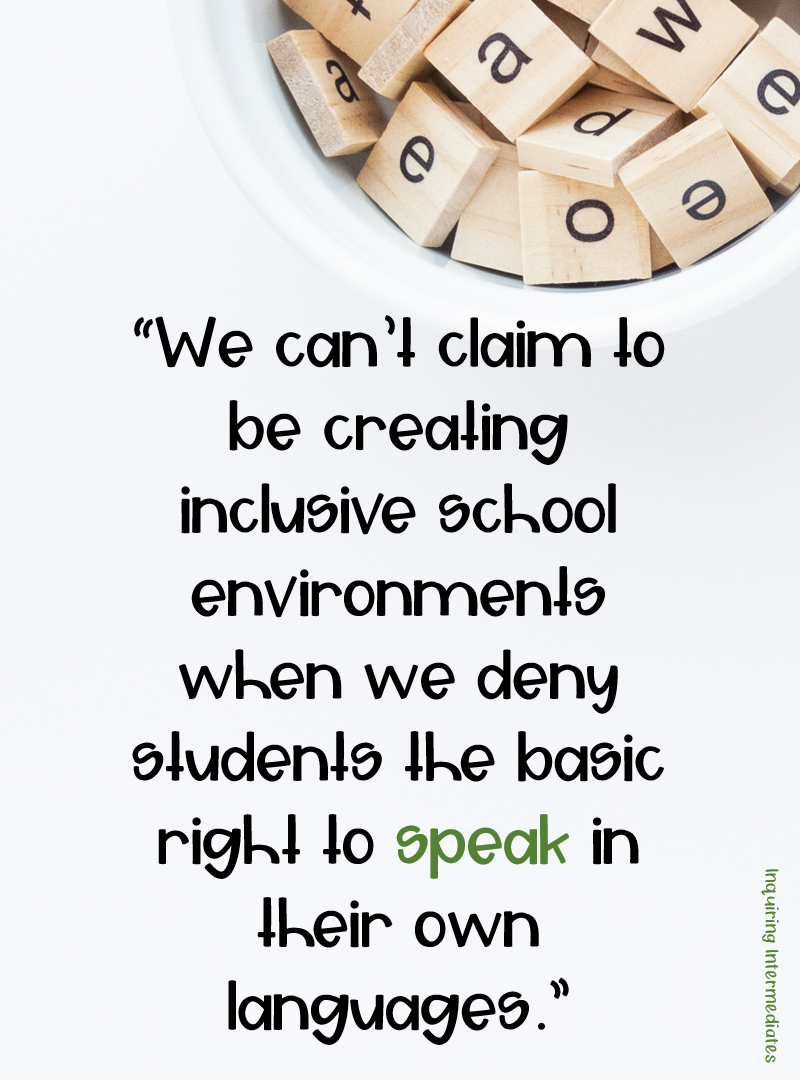 But how will they learn English?

Later that year, I heard another educator lamenting that her students wouldn’t “stop speaking Korean”. I had to sit back a bit before I could respond and ask what she meant. She explained that she felt her students should speak English whenever they were in the classroom, even if they were just talking quietly while doing their work. I kept asking questions about when and how they were speaking Korean, hoping she would see that it shouldn’t be an issue if they were getting their work done and not distracting others. She told me the issue was that speaking in Korean was rude because they weren’t in a space where everyone could understand them. She told me they would never learn English that way. I knew that was false, but the more we talked the clearer it became that we weren’t going to see eye-to-eye.

That ate at me for months. I thought about all the things I could have, should have said. Would the conversation have unfolded the same way if it was a ‘white’ language we were talking about? What if the student was speaking French, Canada’s other official language? What if it had been German, Italian, or some other ‘white’ language? I don’t have proof, but I kind of suspect it would have been a different story. How can we talk about how horrible it was that Indigenous students in Indian Residential Schools were punished for speaking their own language… but not recognize that we shouldn’t be forbidding kids to speak their own languages?

The consequences of English-only policies

The more I thought about it, the more I realized that the whole idea of being told to ‘speak English’ was personal to me. It reminded me of how my grandmother used to scold herself when she accidentally spoke Japanese. Now, English is my first language. I don’t speak Japanese. Because my dad’s family was made to be ashamed of their heritage, I know the consequences of devaluing one language and placing English on a pedestal. I wouldn’t wish that loss of language and culture on anyone.

When my grandmother began losing her memory, she also lost her English. This was devastating. We were so close, yet we slowly lost the ability to communicate meaningfully. I took an introductory Japanese course but only learned enough to ask if she needed to eat, drink, or go to the bathroom. There’s only one phrase I remember from that course today – “Watashi wa nigongo ga, hanashemasen. Gomen’nasai”. It means “I don’t speak Japanese at all. Sorry.”

I am sorry, and I think about it often. When I look at the relationships between my students and their loved ones, I hope that they never experience what my grandmother and I did.

Well, what do academics say?

From my own personal experience, I know how English-only practices lead to shame and disconnect from one’s culture and family. I want better for my students. From an academic standpoint, I know English-only policies are essentially “a surrogate for the arguments and practices of white supremacy” (Bondy, 2016, p. 767) and are not pedagogically sound. Jim Cummins (2012) notes that there is a documented trend “towards an inverse relationship between the amount of instruction in the majority language and minority student achievement in that language” (p.1980). In other words, if making students abandon their first languages at the door is one of your strategies for teaching English language learners, it isn’t going to work. I’m not saying we need to instruct and assess students in each of their individual languages. That’s not feasible. I’m saying that if we want to engage in anti-racist teaching practices, we may need to ditch the pedagogy we grew up with. 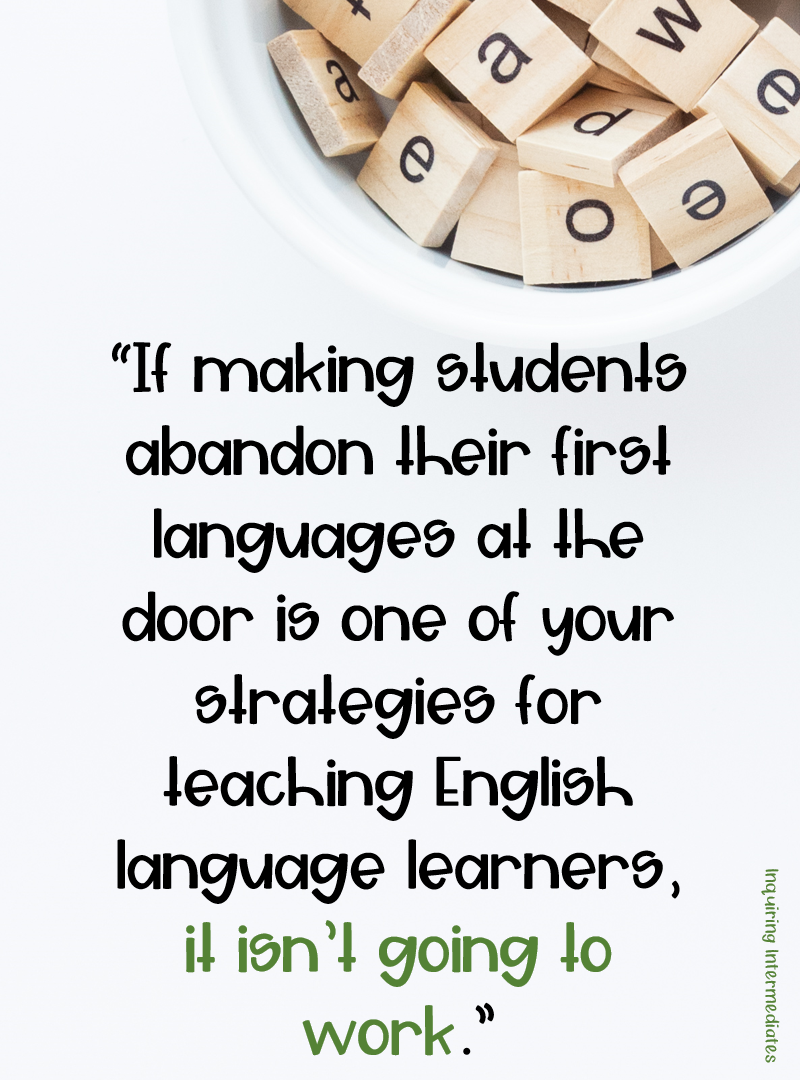 This post sat on my computer for a few months before I finally decided to share it here. It’s too wordy, I thought. It’s too personal. I cited sources! It’s a blog, not a paper!

Every time I heard about another anti-Asian hate crime, I thought of posting it again. Because as educators, we have so much power to teach kids who to value (I’ve talked about how that applies to our read alouds here, too). But every time I revisited it, I just didn’t feel like it belonged on the blog. Then eight women were murdered in an Atlanta spa. Six of them were Asian. They were murdered because some white guy thought of them as commodities he couldn’t have. As lives he had a right to take. And that kind of thinking is rooted in superiority.

Not color-blind. Not just multicultural. Anti-racist.

The multicultural approach to education where everyone pretends to be colour-blind while also somehow remembering to celebrate random cultural traditions from around the world? That’s not enough. Curating a beautiful and diverse collection of books for your students? Sorry, not enough. My second-grade teacher, who read me my first picture book with an Asian character (Grandfather’s Journey) also told me my dad couldn’t really be my dad, because Asian people couldn’t have natural red streaks in their hair… which I did. So yah, multicultural day celebrations and diverse books aren’t enough on their own. We have to actively work on developing anti-racist teaching practices.

As educators, as parents, as citizens: what are we doing to uphold that superiority and inferiority in our classrooms, homes, and communities? We have to do better.

Our lives depend on it. 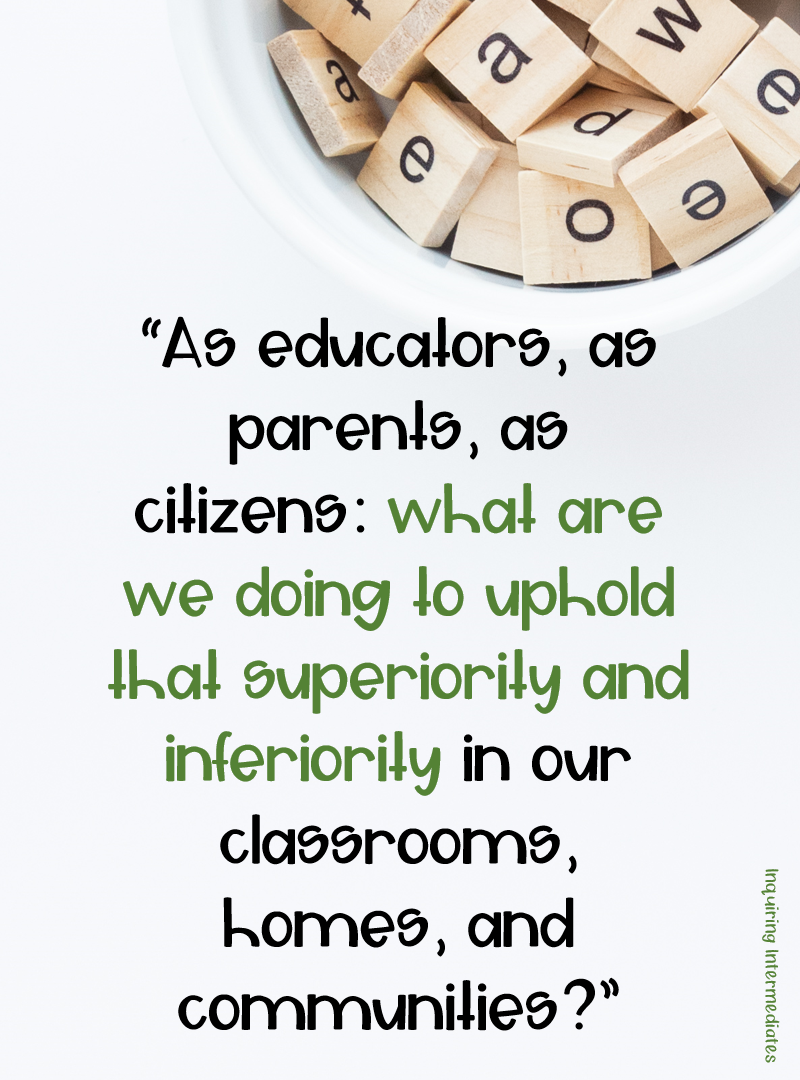 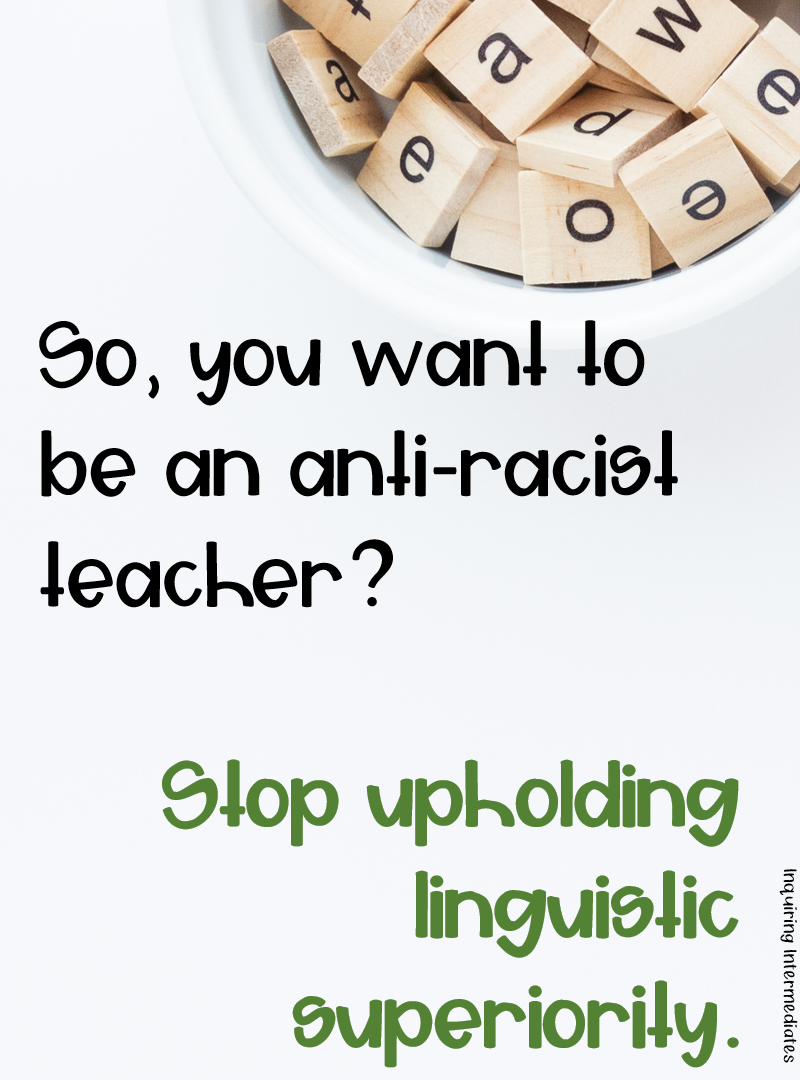