Financial literacy is an absolutely fundamental math skill, so it’s so important to give students time to practice working with money all year long. One of my favourite ways to get some quick Canadian money practice in is with slap games. Slap games are probably the Canadian money teaching resources that I use most frequently. They’re a great way to practice concepts when you have a few spare minutes in your day. They’re also so easy to play – all you need is a projector and you’re ready to go! I also love that there is no set-up or clean-up required. I don’t know about you, but I find a counter or two on the floor every time we pull out our laminated math games…

When it comes to Canadian financial literacy, there are three kinds of slap games I play with my students and each one is for a different skill:

I also like to play a rounding Canadian money game that gets all the kids moving at once. It’s a great brain break and a quick math review all in one!

I would say these are Canadian money games for grades 3, 4, and 5. In younger grades, you would be expecting students to work on their accuracy. In the older grades, it’s more about speed.

The instructions for all three Canadian money activities are super simple. The games themselves are just Powerpoint presentations (although I also have them in PDF). Each slide is split in two, and there are different amounts of Canadian coins and bills in each section. You project the game on a whiteboard or blank wall, call two students up, and challenge them to slap the correct side first. The first one to get it right gets a point! That is if you’re making teams and counting points. I often don’t bother, and my students enjoy the games just as much.

For the Counting Canadian Money game, students slap the side that matches the amount written on the top of each slide. It’s essentially a Canadian money matching game but instead of flipping cards, students are slapping the board. 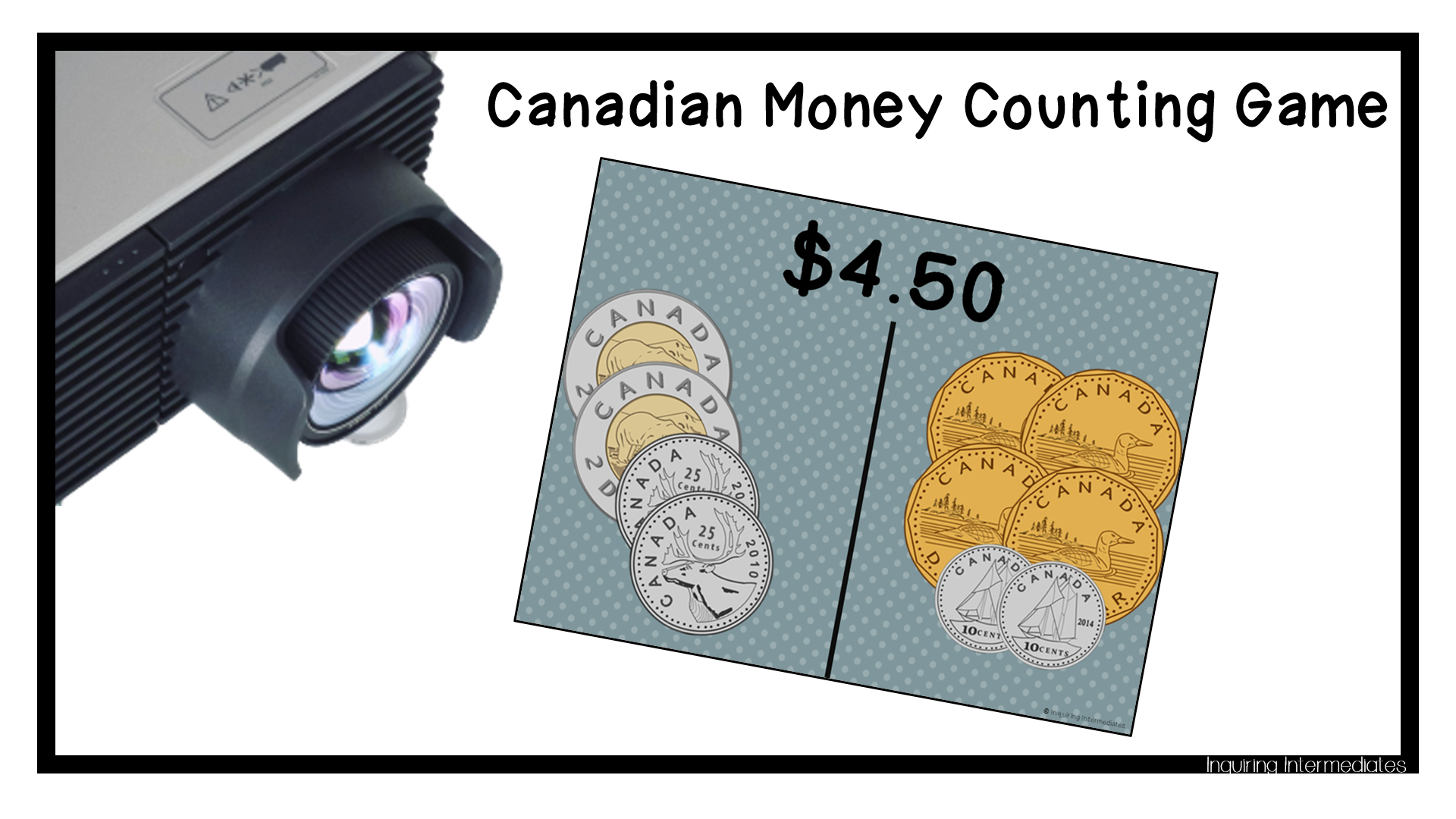 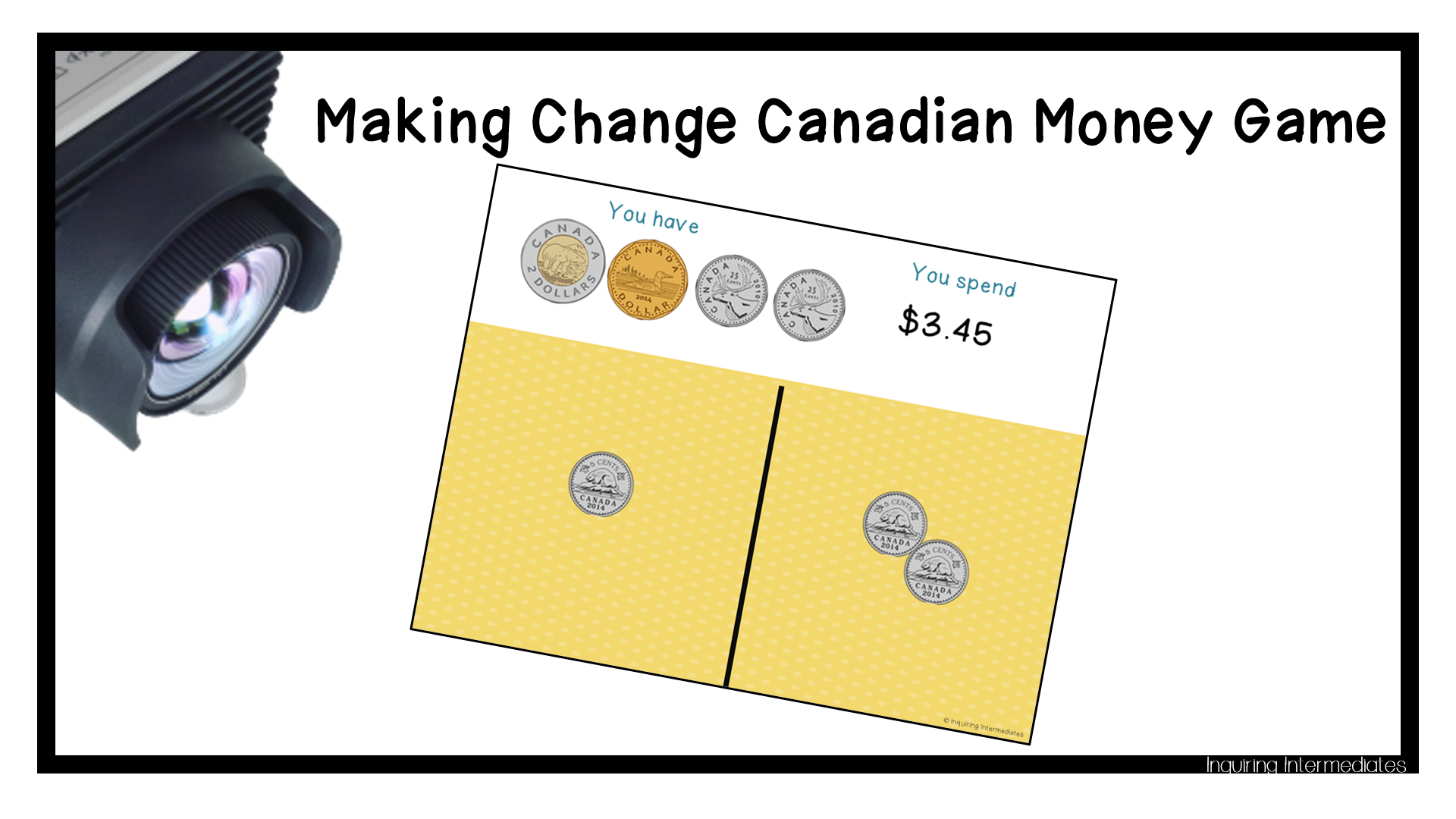 For the Comparing Canadian Money game, the class decides whether they want to slap the side with more or less money before the game starts. Alternatively, you can shout “more” or “less” as you call pairs of students to the front.

For all three slap games, if neither or both sides is/are correct, students put their hands in the air and refrain from slapping anything. This discourages blind guessing. You also only get one slap per turn, so you have to think fast!

The premise of this rounding Canadian money game is super simple… but it can be harder than it looks! A monetary amount shows up on the screen, and kids need to decide quickly whether that amount would round up to the nearest coin/bill or down. If it rounds up, they stand up in front of their chairs. If it rounds down, they sit down. The amounts that end in 7 are always extra-tricky!

These Canadian money math games can be played over and over because there are too many slides in each game for students to memorize. For each of these games, I love the ratio of prep to engagement. They’re no work at all to ‘set up’, and kids really enjoy them. They’re such a fun way to practice making quick calculations and working with Canadian money! 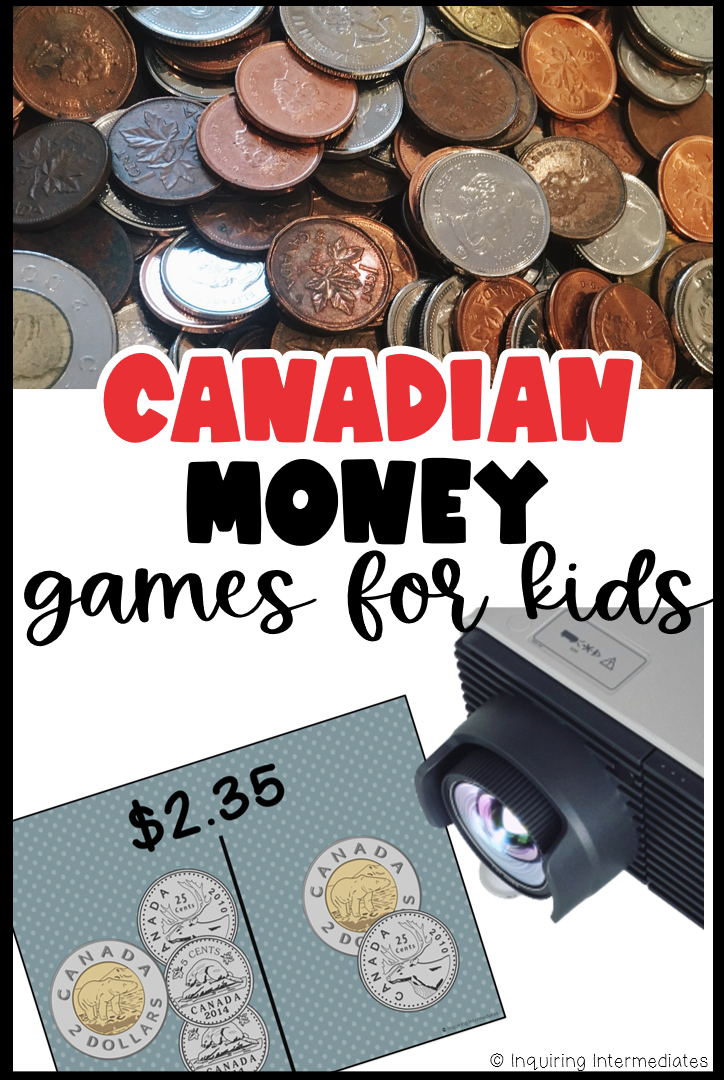 Check out this post with my three favourite Canadian money worksheets for fifth grade!

If you’re looking to take financial literacy to the next level and get kids to apply the skills they have learned to real-world contexts, read how I worked with my students to create budget spreadsheets for an imaginary rental property here.